You are here: Home / Author Interviews / Behind the story of Farewell My Cuckoo by Marty Wingate
Spread the love

Behind the story of Farewell My Cuckoo by Marty Wingate 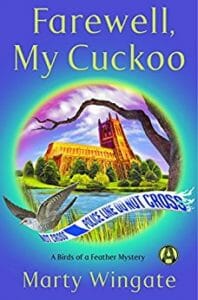 Marty Wingate demonstrates her love of Britain in both of her mystery series. Farewell, My Cuckoo is part of the Birds of a Feather series. A bird lover herself, Marty wanted to bring out how people affect nature through their everyday actions. In this behind the story interview, Marty discusses this issue and more.

The natural world and Farewell, My Cuckoo

“The natural world weaves its way through my books, and with Farewell, My Cuckoo I wanted to show how thoughtless acts can have far-reaching results. I’m always looking for a good bird story for the series, and I had read up on the cuckoo’s plight – their numbers have dropped dramatically in the UK in recent years. Much of this has to do with their migration route – they head for Africa each year – but also with the way their habitat in the UK (and food sources) have diminished. I like to be able to highlight these issues within the mystery while I tell Julia’s story.”

In Farewell, My Cuckoo, Julia Lanchester and her boyfriend, Michael, are in a settled relationship. They’re living together and are happy. However, that wasn’t enough for Marty, who said, “I wondered just what might hang them up from taking that next step. Enter the other ‘cuckoo’ in the form of Michael’s sister Pammy.”

“Being able to tell stories is the best thing ever,” Marty said. “I come from a non-fiction background – I wrote garden how-to articles and books for years – and it feels as if all that was a preparation for creating characters and their stories. It’s not that I get to make everything up – how a bird acts and what a bird looks like is always correct! It’s that I weave real with the fanciful. The village of Smeaton-under-Lyme? Not real – at least, not exactly. I do base it on a mash-up of two Suffolk villages I know well. Hoggin Hall, the home of Lord Fotheringill? Very much based on an actual place – the outside, especially, I describe just as it looks!” 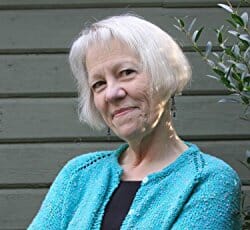 Research and putting up with the bull

Marty said that researching mysteries is also very easy because the concept appeals to potential sources. She said they’re always willing to help in research. “I’ve met a lovely fellow in ‘Smeaton’ who is a fantastic birder, and he’s taken me on long walks through the fields, woods, and lanes of the village to get me accustomed to British birds. It’s been an enormous aid. I had to send off an email to him about the cuckoo rhyme in the book. ‘The cuckoo comes in April, and sings its song in May. In June it changes tune, and July it flies away.’ What does it mean, I asked, that the bird changes its tune? He had an answer and it slipped perfectly into the plot.”

When asked about a memorable research trip, she brought up the bull. “Let me just say that cows are really, really big in person. So, on one of the bird walks around the village, we went through a field with cows. ‘It’s okay,’ Darren said, ‘I see the bull is on the far side.’ Still, we had to make our way around a group of cows who didn’t see the point of moving out of our way. About five minutes later, we’d see a greenfinch and heard a song thrush and we were on the other side of the cows when Darren said, ‘Oh, here’s the bull. Don’t worry. Just don’t go too quickly – I’m sure he’ll ignore us.’ Yikes! Of course, I’ve used a similar situation – not in Farewell, My Cuckoo, but in one of my Potting Shed mysteries!”