You are here: Home / Guest Post / Meet Stella — a papillon and part of the Southern Chocolate Shop Mystery series
Spread the love 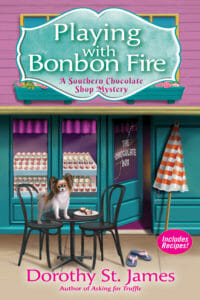 Stella is a five-pound papillon dog. A papillon, which is French for butterfly, has large erect ears that resemble the wings of a butterfly. Many have facial masks that complete the butterfly look. They’re happy, energetic dogs that often keep their owners busy.

This toy dog breed has been prized by European royalty and the wealthy since the 1500s. Even though they have a French name, the breed may have actually originated in Italy or Spain. In Europe they are sometimes called the Continental Toy Spaniel. They are the smallest breed in the spaniel family. 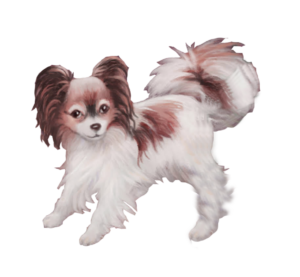 Artists such as Titian and Vicelli often featured these delicate-looking little dogs in their portraits. But as you might expect, a papillon’s looks are deceiving. They might be fine-boned, but never tell a papillon that she’s delicate. These small dogs have the energy of a border collie and are nearly as smart as one too. They excel in agility sports where they can run as fast and jump as high as dogs much bigger than them.

A papillon becomes part of the story

After living with a papillon for nearly a decade and thinking that my Iona was the best companion in the world, I knew I needed to put a papillon in my story. But I didn’t want her to be a compliant lap dog. I wanted Stella to be a foil for my heroine, Charity Penn. I wanted the little pup to make her life a little harder and to challenge Penn to become a better person. So I made Stella a rescue pup that needs some special care and attention of her own.
Iona: The author’s inspiration for Stella and the best companion a dog-lover could ask for.

I truly believe that dogs can do that for us—make us better. A fearful dog might put a spotlight on our own fears. An aggressive dog might show us where we’re trying too hard to achieve a goal. A friendly dog might encourage us to be more open and friendly with others.

Do you agree with this? Have you become a better person thanks to a special pet in your life? 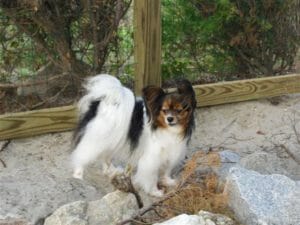 Chocolate shop owner, Charity Penn is at it again-cooking up chocolate treats while trying to keep everyone in the quirky seaside town of Camellia Beach safe. A threatening note, a dead musician, and decades of secrets put the town’s first beach music festival and its band members in grave danger. With help from her meddling half-sister and a new flavor of chocolate sweets to ignite the senses, Penn follows the shifting tide of evidence to uncover the truth behind a nearly forty-year-old mystery.

Dorothy St. James, known for the White House Gardener Mystery series, has gone back to her roots and setting a mystery series in a Southern beach town much like the one she’s called home for the past 20 years. The Southern Chocolate Shop Mysteries combine her love of fine chocolates, quirky Southern charm, with a dash of danger. Asking for Truffle is the first book in this exciting new series. Playing with Bonbon Fire came out in March 2018 and In Cold Chocolate is scheduled to release September 2018.