You are here: Home / Author Interviews / Behind the story of Addressed to Kill with Jean Flowers
Spread the love 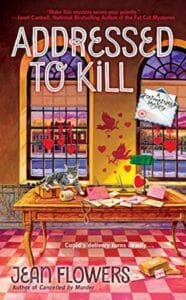 Addressed To Kill is the third book in Jean Flowers’ Postmistress series. Jean Flowers is the pseudonym of Camille Minichino, who must always be a bit confused about her identity because she also writes as Margaret Grace and Ada Madison. For any writer, four pen names is a lot to manage.

I met Minichino while I was living in the Bay Area more than twenty years ago. At that point, we were just ourselves. She was a more seasoned writer than I, but that’s another story altogether.

In discussing this series, Minichino said, “The main issue in all three books is—wait for it—can you go home again? Cassie Miller is the postmistress in her small hometown in western Massachusetts. Until now, she has spent her career in Boston, for college, and then in the main post office. She returns to take care of the aunt who raised her, and at first feels anything but welcome. She asks herself, will she ever be accepted again?”

Minichino received her Ph.D. in physics from Fordham University, New York City. She is on the faculty of Golden Gate University, San Francisco and teaches writing throughout the Bay Area. All of this means she knows campus life well. “There’s nothing like campus politics to bring out the best and the worst in us,” Minichino said. “In Addressed To Kill, the worst takes over. I call upon my decades of campus life as grist for this mill.”

Addressed to Kill and campus life

One issue echoed in this third book is the controversy over the curriculum in college math and physics departments. Minichino said, “I remember endless joint faculty meetings over this issue. If the physics faculty considered a certain level of calculus necessary to understand a physics course, like thermodynamics, e.g., we wanted the math department to offer that course for us. The math department would be defensive—math was not a tool to be applied, but a study in its own right. Teach your own calculus, was the cry, and most of the time that’s what we’d have to do, depending on the willingness, or not, of the department chairs.”

In addition to interdepartmental politics, Minichino said there’s another issue that comes up in Addressed To Kill. “The book also ties in the rare but serious problem of exchanging money for a good grade. I can’t say too much more about either of these issues without revealing plot twists. The main point is that nearly every faculty meeting I’ve attended suggests a motive for murder…whether it’s a petty thing like who supplies the faculty room coffee, or whether Noam Chomsky, a recognized linguistic scholar but political radical in his time, is allowed to speak at an assembly.”

Readers sometimes wonder why authors use so many pen names. “It’s the publisher’s choice to go with pen names, as a kind of branding tactic,” she said. “My dearest friend and cousin passed away as I was beginning this series; I took a form of her name, which was Jean Florentino.”

Minichino, who classifies herself as sensitive, recalled an incident in which a potential reader wasn’t as kind as she could have been. “I sent a copy of an earlier book in the series to a postmistress in a small town near me, in the Bay Area of California, suggesting she might enjoy it and asking for critique or any input she might have. She sent the package back, with a note that said a) she had no time to read ‘this kind of stuff,’ and b) she might write her own book just like it.”

If you like to read “this kind of stuff,” learn more about Camille Minichino at minichino.com.