You are here: Home / Reviews / Review of Cast the First Stone by James W. Ziskin
Spread the love 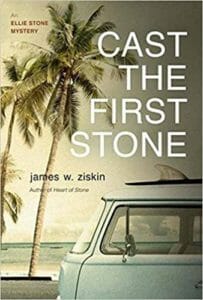 February 1962: Tony Eberle has just scored his first role in a Hollywood movie, and the publisher of his hometown newspaper in upstate New York wants a profile of the local boy who’s made good. Reporter Ellie Stone is dispatched to Los Angeles for the story. But when she arrives on set to meet her subject, Tony has vanished. The director is apoplectic, Tony’s agent is stumped, and the producer is found murdered.

Ellie is on the story, diving headfirst into a treacherous demimonde of Hollywood wannabes, beautiful young men, desperately ambitious ingénues, panderers, and pornography hobbyists. Then there are some real movie stars with reputations to protect. To find the killer, Ellie must separate the lies from the truth, unearthing secrets no one wants revealed along the way. But before she can solve the producer’s murder, she must locate Tony Eberle.

In this fifth installment of the Ellie Stone Mysteries, Ellie is taken out of her comfortable environment of New York and put on assignment in Los Angeles. The change of setting is a breath of fresh air in the series and an opportunity to present Ellie with new obstacles to overcome, which she does brilliantly.

Welcome to the world of LA in the 1960s. This is the land of odd-ball characters from newspaper reporters to Hollywood actors to producers. As always, Ellie is heartwarming, yet hard-boiled, while dealing with subject matter that is at times provocative and distressing.

The plot is skillfully crafted and filled with descriptions indicative of the era. A true mystery, Cast the First Stone can be difficult to put down as the clues unfold. It’s no wonder this series is a 2017 Edgar Award Nominee.