You are here: Home / Reviews / Review of The Lost Order by Steve Berry
Spread the love 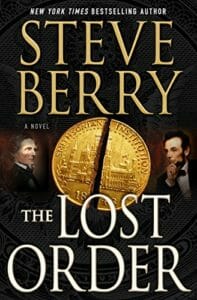 The Knights of the Golden Circle was the largest and most dangerous clandestine organization in American history. It amassed billions in stolen gold and silver, all buried in hidden caches across the United States. Since 1865 treasure hunters have searched, but little of that immense wealth has ever been found.

Now, one hundred and sixty years later, two factions of what remains of the Knights of the Golden Circle want that lost treasure―one to spend it for their own ends, the other to preserve it.

Thrust into this battle is former Justice Department agent Cotton Malone, whose connection to the knights is far deeper than he ever imagined. At the center is the Smithsonian Institution―linked to the knights, its treasure, and Malone himself through an ancestor, a Confederate spy named Angus “Cotton” Adams, whose story holds the key to everything. Complicating matters are the political ambitions of a reckless Speaker of the House and the bitter widow of a United States Senator, who together are planning radical changes to the country. And while Malone and Cassiopeia Vitt face the past, ex-president Danny Daniels and Stephanie Nelle confront a new and unexpected challenge, a threat that may cost one of them their life.

Review of The Lost Order:

Once again, Steve Berry takes us on a highly entertaining treasure hunting adventure with Cotton Malone and Cassiopeia Vitt. Berry takes little known facts and expertly weaves them into the novel in a way that makes learning about history entertaining.

The writing is classic Steve Berry, very smooth with a well thought out plot. The characters are realistic and fit seamlessly into a complex thriller in which historical fact and compelling fiction become indistinguishable.  Another great addition to the Cotton Malone series.