You are here: Home / Author Interviews / Behind the story of Patriot with Ted Bell
Spread the love 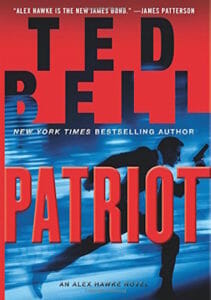 New York Times bestselling author Ted Bell is one of those writers who knew what he wanted to do at a very young age. But, before Bell was ready for a career as a professional novelist, he spent time in the world of advertising. His latest release is Patriot, which is a new Alex Hawke novel that allows Bell to pursue another interest of his, the world of international politics.

“Writing is a lifelong passion of mine,” Ted Bell said. “I started writing short stories about cowboys and aliens at age eight for my third-grade homeroom class. The positive reaction I received sealed my fate.”

Those third-grade accolades might have given Bell the urge to be a writer, but his path wasn’t direct. Bell spent one year working at a bank, then quit. In his bio, he says, “I moved to Europe to be a writer, but mostly just to emulate Scott Fitzgerald who was, and is, my lifelong idol. I bounced around Italy, France, and in Rome, got cast as a cowboy in a spaghetti western that never got made, ran out of money and ideas at roughly the same time, got a job at a big New York ad agency.”

His days in advertising taught Bell lessons about writing. He boiled those lessons down to three short bullet points.

Patriot is Bell’s second novel about Vladimir Putin. The first was “TSAR.” Bell said, “The US positions about the New Russia have been misleading in my view, based on my recent studies with the Political Science and International Studies at Cambridge University UK. Putin, with a 90% approval rating, is now acting as a ‘Tsar’ and his belligerent attitude has returned US/USSR to Cold War status. The media and government won’t say it so I wrote a novel about it, and made this tale of political deceit as exciting and fun to read as I could.”

In TSAR, an MI6 officer meets and befriends Putin. Bell said, “It’s a crazy relationship, but it works somehow. The idea of a ‘sequel’ to that story came about when the Crimea and the Ukraine were invaded and the civilian airline was shot down by the Russians without hint of outrage from our side at this obvious mass murder.”

One thing Bell believes can help tell a better story is humor. “I find that most ‘Action’ thrillers are largely devoid of humor. I find my hero’s relationship with the world’s most dangerous man quite comical.”

If they want you, the airports are where they’ll get you…

Bell visits each country he plans to write about. He said, “Russia was by far the most challenging. My friends in the intelligence community and state department warned me that this trip was a bad idea. But they would register me at the Moscow Embassy and they would monitor me. I met with the Undersecretary there, as well as the ICE guys and they said beware of airports coming and going.”

Bell was told by the authorities, “If they want you, the airports are where they’ll get you.”

“I replied that as long as they didn’t pull my fingernails out, I was cool with that. Good story, good publicity, you know. Oddly enough the last day in Moscow, standing on the curb outside a restaurant, a BMW with blacked out windows started up on the corner and ran up over the curve and tried to hit me! I felt flattered.”

Learn more about Ted Bell and Patriot on his website at tedbellbooks.com.