You are here: Home / Author Interviews / Behind the story of John Mullen’s Digital Dick
Spread the love 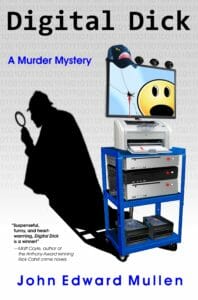 In the mystery genre, books involving a computer as the protagonist are few and far between. A computer with artificial intelligence is even rare, but that’s exactly what debut author John Mullen has created in “Digital Dick.” Mullen said he never intended to write about a serious issue, but as he wrote his first published mystery, he realized he was asking the question, “who and/or what should we include in the category of ‘person?’”

“The theme appeared, I think, because I was writing the book from Dick’s point of view,” said Mullen. “Dick considers himself a person. He also thinks he has a soul. Early in the book, Dick argues with a radio evangelist about whether or not a computer could have a soul.”

John Mullen said the idea for the book came to him after reading several of Rex Stout’s Nero Wolfe novels. “Wolfe is a 300-pound ‘thinking machine.’ Like Sherlock Holmes, he is a superb ratiocinator, but unlike Holmes, Wolfe hates to leave his brownstone. He has his assistant, Archie Goodwin, do all the leg work, fisticuffs, etc.

…if a human can just sit in his house and solve crimes by cogitating, a computer should be able to do the same.

“Well, I thought, if a human can just sit in his house and solve crimes by cogitating, a computer should be able to do the same. That was the genesis of Digital Dick. After I started writing the novel, I discovered I wasn’t the only mystery writer to create an Artificial Intelligence sleuth. Donna Andrews has done so in her Turing Hopper series. Dave Zeltserman has also done so.”

John Mullen said there were a few brief times in his youth when he realized he might be a storyteller, but he didn’t begin writing seriously until after he visited England in 1989. He started writing a Sherlock Holmes novel at that point, but didn’t finish it until years later. As with many first-time novelists, he gave up on the first book when it didn’t sell. Then, in 2008, he began writing “Digital Dick.”

It wasn’t until Mullen was in Yosemite doing some volunteer work for a week that he realized he had a well-rounded character in his computer protagonist. “I had been a programmer/analyst for a dozen years, so I knew something about computers. However, when visiting Yosemite, my muse suggested that Dick should hate cats. At that point, I knew I had a real character, not one of flesh and blood perhaps, but a character with a heart and a soul.”

In addition to the question of his protagonist being a person or not, Mullen also had a challenge. He had to make sure Dick had credible investigative powers. “It was critical to me that Dick be able to solve a murder in a way that made sense for him as an artificial intelligence, and also that his approach would have been something the police might have overlooked. I arrived at what I believe is a solution to this challenge. I hope readers will agree.”

For more information about John Mullen, visit his website at johnedwardmullen.com.