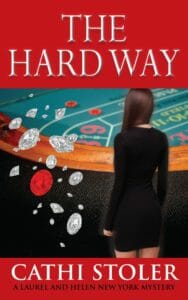 Native New Yorker Cathi Stoler loves to write. The author of three mysteries, Stoler says she also enjoys visiting the locations in her novels and talked about her newest, “The Hard Way,” for this interview.  Stoler said, “I love to use different locations, exotic places, that can take readers out of their usual lives for a while; give them a sense of fantasy and luxury.”

Stoler likes to use current events as a starting point for her novels. She said, “‘The Hard Way,’ like my other two novels in the series, loosely revolves around an event that is part of what’s currently happening in the world around us, albeit with a twist. With ‘Telling Lies,’ I became caught up in the record-breaking prices of master artworks and art fraud and in ‘Keeping Secrets,’ the more I read about identity theft, the more I wanted to explore it and write about it.”

The idea for “The Hard Way” came to Stoler after she wrote a short story about her protagonist, PI Helen McCorkendale, helping an old friend who had opened the January nightclub in Las Vegas. It was the nugget from which the plot grows to encompass murder, deceit, and treachery. Those events pit Stoler’s protagonists against a plan to steal the world’s most precious red diamond. Stoler said, the diamond in the novel “is based on a rare red diamond, [the] Kazanjian diamond, a 5-carat stone on display at the Museum of Natural History in New York City.”


When PI Helen McCorkendale investigates the murder of a mysterious woman at a Las Vegas resort, she’s thrown into a whirlwind of diamond dealers & jewel thieves, all of who would kill to obtain the world’s most precious red diamond. Stoler said, “Setting is very important to my stories and January presented a perfect place for a diamond dealers’ convention. It also as provided a good reason for Helen to be on the scene, first to celebrate the grand opening with her friend, and later to help him find a murderer.”

Las Vegas is one of the locations Stoler visited to research her novel. She said, “For me, it’s fun and exciting because I’ve been to all of the places in my books, except Monte Carlo. I think this lets me have a real sense of a place and describe it accurately, which for me helps to make it come alive.”

Stole also said she’s always enjoyed reading. Her favorite genre is, not surprisingly, the mystery genre. She began writing her first novel during a college class. She said, “Each week, our instructor picked a few pieces to read aloud to the class, which we would then discuss. One week, she chose the first chapter of my first novel. I decided that if the class liked my work, I’d continue and if they didn’t, I give up the idea and stick with advertising copywriting, my day job. Fortunately for me, they all liked it and I kept writing.”

In addition to her novels, Stoler has also published a novella, “Nick of Time.” She’s also working on the first book in a new series, “Bar None, A Murder on The Rocks Mystery.” Learn more about Cathi Stoler on her website at cathistoler.com.