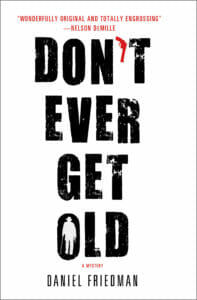 Personal tragedies can define the careers of writers. In this interview with Daniel Friedman, one of six 2013 Edgar nominees for Best First Novel, he tells how a tragedy is defining what he writes and discusses the impact of award nominations on his career. Aspiring writers might consider an Edgar nomination as the pinnacle of a career, but Friedman sees things differently. He said, “I’m in a somewhat vulnerable position right now, because I might have a target painted on my back and I’m not sure my career can withstand a barrage. I don’t think I have the option of putting out a mediocre second book.”

The title of Friedman’s Edgar-nominated book is “Don’t Ever Get Old.” It’s about an elderly WWII veteran who goes hunting for a Nazi fugitive. The book explores aging in America, a subject close to Friedman’s heart. He said, “We have a lot of people around today who are living with chronic health problems that used to kill people off, and there really isn’t a lot of art that explores what life is like for these people. I think, to some extent, old and sick people become kind of invisible in our pop culture.  There’s something terrifying about imagining what it must be like to be 80, and to know that your quality of life is going to decline precipitously over the course of a couple of years, and that you’re going to have to make a series of compromises and give up a lot of dignity to keep going.”

In defining what drives him as a writer, Friedman said, “I guess the shadow that sort of hangs over all my writing is my father’s death. He was a lawyer in Memphis, and he was shot and killed in the parking garage of his office building by a delusional former client when I was a junior in college. A lot of what I do in my fiction is breaking down my emotional response to that event and reassembling the pieces in different ways.  Grief and rage are closely connected for me, and that’s a theme that manifests in different ways in ‘Don’t Ever Get Old,’ the upcoming sequel ‘Don’t Ever Look Back,’ which comes out next year, and my standalone historical novel ‘Riot Most Uncouth,’ which is either going to be a Fall 2014 or a Winter 2015 title.”

The plot of “Don’t Ever Get Old” follows Buck Schatz, a senior citizen and retired Memphis cop, who learns that an old adversary may have escaped Germany with a fortune in stolen gold. Buck decides to hunt down the fugitive and claim the gold. There are many people after the treasure, and Buck’s investigation quickly attracts unfriendly attention.

Dealing with an issue as serious as aging in a mystery—and writing that mystery to a level that qualifies it for an Edgar nomination—would be tricky business indeed. Friedman said, “I was very careful to streamline all of the machinery of the mystery plot, so the book would feel fast and tense.” He added, “I think I’m in a situation where doing the same thing again isn’t going to be good enough. My protagonist has a very specific set of problems and a distinct voice, and, while readers enjoyed that the first time around, it might get old as I try to stretch the concept over multiple books.  So my goal with the new book is to stay true to the character without repeating myself.”

Learn more about Daniel Friedman on his website at danieljfriedman.blogspot.com. Or, follow him on Twitter as he live streams much of what’s happening in his life at twitter.com/danfriedman81.