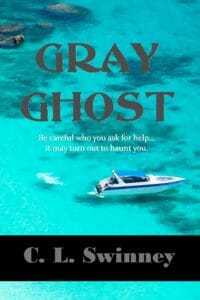 I met Chris Swinney through Oak Tree Press. He’s been steadily working toward publication of his first novel and is a dynamo when it comes to social media. He’s also an active narcotics officer whose first mystery, titled “Gray Ghost,” is about cocaine being smuggled from the Bahamas to Miami. “Gray Ghost” follows two Miami Dade Police Department Narcotics detectives, Bill Dix and Steve Petersen, on a fly fishing vacation to Andros Island in the Bahamas. When the detectives learn that their fishing guides might have been drug smugglers who were killed for their $100 million cocaine load, they decide to help local officials bring in the man behind the killings.

Dix and Petersen are drawn into helping their island friends, and chase down leads in Miami as well as the Bahamas until they identify the diabolical plot of the man known only as “The Caller.” The detectives set an elaborate trap to snare The Caller. What they don’t know is that The Caller already knows about the trap. With the help of the locals, the detectives are led back to Miami, where they capture another dealer, who says he can lead them to The Caller. But, is The Caller one step ahead again?

Some readers might find the plot a bit slow at first, but there is a good build up of tension and action toward the end. While this book has a great storyline about cocaine smuggling and the characters are well developed, the dialogue is very clean for law enforcement. This is the first book in the “Bill Dix” series; I’ll be waiting to see how Chris develops his characters in subsequent installments.

For more information about C.L. Swinney, visit his website at clswinney.wordpress.com.