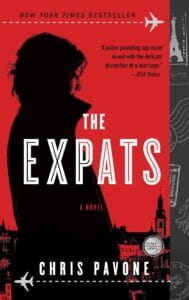 “The Expats” by international bestselling author Chris Pavone won the 2013 Edgar Award for Best First Novel. In this interview, the author discusses why he wrote the book, how his experiences abroad made it better, and the fragility of first-time novelists.
Pavone began work on his international bestseller, “The Expats,” while living abroad. The move turned out to be one of the triggers that caused Pavone to write the book. “When our twin boys were four years old, my wife and I moved from New York City to Luxembourg, for her job, and I became an expat stay-at-home parent. All around me were women who used to do something else, somewhere else, with spouses who worked very long hours and traveled frequently. I realized that some of these women didn’t really know what their spouses did on a day-to-day basis in the office, or why precisely they were on business trips. It occurred to me that perhaps some of these men were not doing what they claimed. And maybe some of the wives too.”
With the question of what the husbands, and possibly the wives around him, might be doing for a living fresh in his mind, Pavone formulated the concept for “The Expats.” He describes it as, “A woman moves abroad with her family, and finds that no one in her new life is who they’re pretending to be.”
The same might be said for the book, because Pavone describes it as “two completely different types of books.” He said, “It is foremost an espionage caper that revolves around a huge chunk of stolen money, duplicitous FBI and CIA agents, and a cast of clever characters who are all lying to one another. But it is first an honest, realistic novel about a marriage, about a woman trying to reinvent herself, about the limits to honesty and the capacity for forgiveness.”
In writing a story that’s neither pure thriller nor pure family story, Pavone gambled on being accepted by readers and critics. He said, “There may be nothing more fragile than a first novel. (Or for that matter a first novelist.) Such a wide variety of things can go wrong, and any one of them can be fatal. And so the things that go right—an enthusiastic blurb, a positive review—are all tremendously uplifting. And the Edgar perhaps most of all—a wonderful validation, and a great motivation to open up the computer every day, and type.”
Chris Pavone grew up in New York City, attended Cornell University, and worked in a variety of publishing jobs for nearly twenty years. He’s worked as a copy editor, managing editor, acquisitions editor, and associate publisher. He’s also been a ghostwriter, but his longest stint when working in publishing was as a cookbook editor. His second novel, “The Accident,” will be published in early 2014. Learn more about Chris Pavone on his website at www.chrispavone.com.