You are here: Home / Archives for mystery 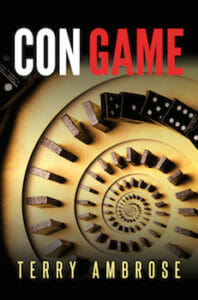 Tonight I’ll be in the hot seat with radio talk-show host Pam Stack of Authors on the Air. I’ve been interviewed by Pam before and it was a wide-ranging interview. What crazy subjects will we cover this time? I don’t know, but it’s sure to be lots of fun.

You can bet I’ll want to discuss “Con Game,” but also we’ll surely get into the next McKenna Mystery, “Big Island Blues.”

It’s been with a great deal of trepidation that I’ve been waiting for the results of the review of my thriller Con Game by Kirkus Reviews. Finally, today, that review came in. I’m very happy with the review—they didn’t slam me (yeah!)—and said, “Ambrose touches on high-finance malfeasance, adultery and drug dealing with the kind of snark that will remind readers of Elmore Leonard. Given their moral nuances, Roxy and Skip are entertaining anchors for a series, and the introduction of Lily brings the promise of further complications for their relationship. . . A solid second round of capers featuring this attractive, cynical couple.” — Kirkus Reviews

Find the entire review at Kirkus Review for Con Game.

Learn more about the book on the Con Game book page on this site.

The “Con Game” is on! The sequel to “License to Lie” was released just this week. In  honor of the occasion, I’m trying out a little giveaway. You can enter to win a soft cover copy of “Con Game” if you live in the U.S. (sorry, but the international postage is a killer). If you’re not in the U.S., fear not, you’ll be eligible for a Kindle version.

Con artist Roxy Tanner just walked away with $2.6 million on her latest job, but left behind a dead body. Skip Cosgrove wants to help Roxy find out who killed her mark, but he has his own problems—a man the former criminologist once helped put behind bars is back for revenge. With the cops closing in on Roxy, and a killer on the hunt for Skip, the last thing they need is a gutsy street kid turning their lives upside down—until it happens. Now, all three must decide how far they will go to survive a killer’s con game.

If you just want to learn more about the book, click here.

Nick Fox is a world-class con man. Kate O’Hare is a kick-ass FBI agent. The two began working together when Kate eventually tracked down and arrested Nick. Together their job is to bring down the bad guys—those that always stay one step ahead of the normal law-enforcement channels.

The characters, both Nick and Kate, tend to be somewhat one-dimensional. He’s a dashing, handsome, and brilliant playboy type who is as smooth with the ladies as he is with a set of lock picks. Kate is tough, smart, and beautiful, capable of catching the eye of any man she wants, especially one with a love of life such as Nick.

The premise, finding the worst of the worst, as far as criminals go, and bringing them to justice, is popular with today’s writers as well as readers.

The problem with “The Chase” is that it, much like the characters, falls flat in several ways. Where the banter between the characters should be sharp and witty, it feels like a huge cliché. Dialogue is not crisp and sharp, but convenient and designed to move the plot forward in obvious ways. The other major issue is changes in point of view. The authors alternate point of view constantly, which removes any element of suspense.

The good news is that plotting and pacing are well done. This story moves quickly from scene to scene to a final climax that puts both characters at risk. Readers who want the equivalent of a TV series on the written page should enjoy “The Chase.” 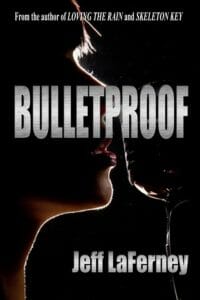 In this interview with Jeff LaFerney, the author of “Jumper,” a bestselling, award-winning science-fiction/adventure novel, talks about his Clay and Tanner Thomas mystery series. LaFerney has been a language arts teacher and coach for more than twenty years. He describes each book in the series as “a good mystery with no sex or swearing.”

In “Bulletproof,” Clay Thomas is abandoned by two of the people closest to him after a devastating injury to his father. He’s also pursued by the local police chief for crimes he didn’t commit. He is determined to find the culprit of a series of local robberies for which he’s been accused while fulfilling a promise to a ghost to solve his eleven-year-old murder.

“The main characters, who have the ability to read and control minds, are moral and good,” said LaFerney. “I developed characters who have phenomenal abilities, yet they care more about others than themselves.”

This particular novel grew out of LaFerney’s desire to challenge his protagonists. He said, “I wanted a character with the same abilities as my protagonists who uses them to commit a series of robberies. I planned a mystery where Clay Thomas would be accused of the crimes, so he’d need to get involved. However, the town I used is famous for its haunted hotel which gave me the idea of overlapping the robberies with an unsolved murder of a ghost in the hotel.”

Of those ghosts, LaFerney said, “The ghosts in the book aren’t scary, but all correspond to the actual stories that are documented about the Fenton Hotel.” He added, “There are two mysteries in Bulletproof and suspects could be guilty for either or both crimes. Though Clay and Tanner have parapsychological skills, they solve the mystery like any other detectives, gathering clues, asking questions, and getting cooperation from others.”

LaFerney sees writing as a logical extension of his background as a teacher. “I read a lot and teach books and writing,” he said. “I’ve gone a lifetime preparing for writing books. My books use lots of humorous dialogue and situations, and they move along quickly. I love mystery, misdirection, unusual characters, and surprise endings. My athletic protagonists have many similarities to my son and me.”

According to LaFerney, “The ending is a surprise, both the identity of the thief and the solution to the murder, which has been a closed case for eleven years. It’s a book for men and women, young and old.”

Jeff LaFerney’s other novels featuring Clay and Tanner Thomas include “Loving the Rain” (a suspense novel) and “Skeleton Key.” LaFerney does not have a webs tie, but can be found on Facebook at www.facebook.com/authorJeffLaFerney or on his blog at http://jefflaferney.blogspot.com/.