You are here: Home / Uncategorized / Guest post for Fireworks, A Firecracker and Foul Play
Spread the love 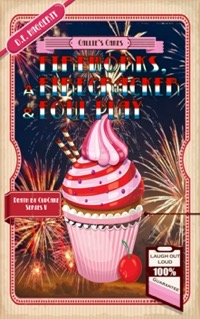 the idea for Fireworks, A Firecracker & Foul Play came about

Readers are always asking where an idea for a particular book comes from. Often, I’m not exactly sure. Mostly my muse visits me in my dreams and I wake up with an idea. She’s pretty awesome that way. Sometimes, however, an idea is sparked by a real life event, which is the case in Fireworks, A Firecracker & Foul Play.

Many lifetimes ago, I was a military police investigator in the U.S. Army. We were the detectives of the military base. We wore plain clothes and interviewed victims and detained suspects, just like a civilian detective. And just like in the civilian world, suspects sometimes fooled detectives.

Once upon a time, I interviewed a woman who I believed was a victim. I don’t remember what the crime was anymore. During the course of the interview, it became clear she wasn’t a victim but a suspect. I immediately stopped the interview to read her her rights. I treated her with kid gloves as she was distraught.

A few days later I got pulled into my boss’s office. The woman had made a complaint against me. She said I harassed her! I was not a happy camper. I won’t lie and say I’ve never pushed the envelope when interviewing a suspect, but I know I treated her nicely (Guilting suspects into confessing was my thing.)

For some reason, this memory resurfaced last year. As soon as I decided to write a July 4th novel in the Death by Cupcake series I knew I would use the story as a launchpad for Fireworks, A Firecracker & Foul Play.