You are here: Home / Reviews / Review of Southern Double Cross by Caroline Fardig
Spread the love 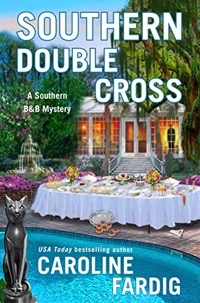 Quinn Bellandini is ready to get back to running her grandfather’s B&B in Savannah, Georgia, with her sister, Delilah—but first, she has to coordinate a fundraising event at the house of local philanthropists, with the help of her boyfriend, Tucker Heyward. Everything is running smoothly until Quinn’s friend, Pepper Fox, frantically calls her with the horrifying news that the lady of the house was found dead. Pepper’s brother, who was working as a caterer, is soon charged with her murder. Pepper knows her brother didn’t commit the crime and asks Quinn, now a veteran detective with two solved murders under her belt, to prove his innocence. Quinn can’t bear to see her friend upset and enlists Delilah and Tucker to help investigate. The invite list quickly turns into the suspect list as tensions mount and old feuds are brought to light. Could Quinn have hired the only catering company in Georgia that throws in a murder on the side?

My review of Southern Double Cross

Southern Double Cross has nicely developed characters and a likable main protagonist. Though there are multiple sleuths, the story focuses on Quinn Bellandini, the main protagonist, and doesn’t do a lot of unnecessary head hopping. The plot was well-thought out. And the icing on the cake was the ample amount of double-crossing going on. Quinn has a sweet-as-honey Southern persona that played well into the role of the reluctant sleuth. Her reasoning for tracking down a killer seemed reasonable, though the rationale for not going to the police began to feel a bit strained toward the end of the book. The writing was crisp and clean and felt as though the backstory was brought out on schedule and as needed. For the most part, there was a growing sense of tension as the mystery unfolded, which kept me interested until the end. All-in-all, I found plenty of things to like about Southern Double Cross. a Rafflecopter giveaway