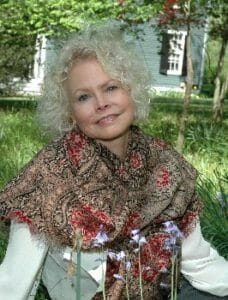 Joanna Campbell Slan is a fellow Booklovers Bench author. She’s one of those prolific writers who turns out quality material quickly and consistently. I’m not sure I could keep up with the writing pace she maintains. This interview was also published in my Examiner.com column, National Crime Fiction.

Award-winning and National Bestselling author Joanna Campbell Slan (www.JoannaSlan.com) is the creator of the Kiki Lowenstein Mysteries, (nominated as an Agatha Award Finalist), and The Jane Eyre Chronicles. She’s an extremely busy writer, but took time out for this interview to discuss why she wrote a series that casts Jane Eyre as an amateur sleuth and how winning the Daphne du Maurier Award has affected her writing.

Slan likes to write books that do more than just entertain. She said, “Every book I write includes a social issue. ‘Death of a Schoolgirl’ explores the question, ‘How much responsibility should we take for other people’s children?’” She added, “Books that stand the test of time illuminate human nature and the grave questions every one of us faces as we move through our lives. Although my book is set in 1820, we’re still grappling with questions about child abuse today—and more importantly, we all need to consider our role in protecting the least among us.”

When she began writing her new series, Slan knew she needed a strong protagonist. She felt as though she’d found that protagonist in Jane Eyre. Slan said, “I decided to tackle a continuation of Charlotte Brontë’s classic because I realized Jane Eyre would make a marvelous sleuth.” A book called “Governess: The Lives and Times of the Real Jane Eyres” by Ruth Brandon was further impetus for her story. “I was struck by the horrible circumstances of these young women. Many were impoverished gentlewomen who worked for nouveau riche employers who hated them. They were isolated in the extreme and often mistreated—both mentally and physically. Those two books, one fiction and one non-fiction, were the catalysts for the first book in The Jane Eyre Chronicles.”

“Death of a Schoolgirl” is a continuation of Charlotte Brontë’s classic love story. The book begins in 1820 with Jane happily married to Edward Rochester. A cryptic letter warns that his ward, and Jane’s former student, is in danger. Jane travels to London and quickly learns that a murderer walks the halls of a girls’ school. Jane does her best to protect the students while investigating—but her first turn at playing amateur sleuth might well prove her last.

Slan said that she’s always wanted to be an author. “As a kid I stapled papers together and told everyone, ‘This is my book.’” Now that she’s a multi-published author, she has also realized how difficult an author’s job can be. She said, “Every author has to prove herself every day in the eyes of her readers.” As the winner of the 2013 Daphne du Maurier Award for Excellence, Slan has proven herself. That has not, however, changed the way she sees her writing. “The Daphne is like this huge blessing from an unseen hand. I approached writing historical romance on my knees in fear, trembling and quaking. I kid you not . . . From the moment I conceived the project, I knew I was treading on sacred soil. Brontë was a genius.”

The award has affirmed for Slan her status as a writer. “I feel a warm glow inside. A little voice keeps doing a happy dance and yelling, ‘I did it!’ I hope she never settles down.”

Learn more about Joanna Campbell Slan on her website at www.JoannaSlan.com.