You are here: Home / Archives for cozy mystery

McKenna, a former skip tracer, flies to the Big Island of Hawaii to help find his best friend’s missing niece. No sooner has McKenna’s search begun than he’s got a teenage hacker messing with his investigation, has uncovered deep family secrets, and is caught in the middle of a twenty-year-old plan of revenge. Even worse, everyone he questions is spooked by a 70-year-old Indian curse on a 1942 Martin guitar.

With a killer on the loose and his best friend’s very hot sister pressuring him for results, McKenna’s got more than trouble in paradise, he’s got a volcano ready to blow.

About the Book
Spread the love

What the pros are saying about Big Island Blues

“Big Island Blues sizzles from a gripping beginning to a finale both taut and sweet. As they say in the islands – maikaʻi loa” (Hawaiian for very good).—Bestselling and award-winning author Carolyn Hart 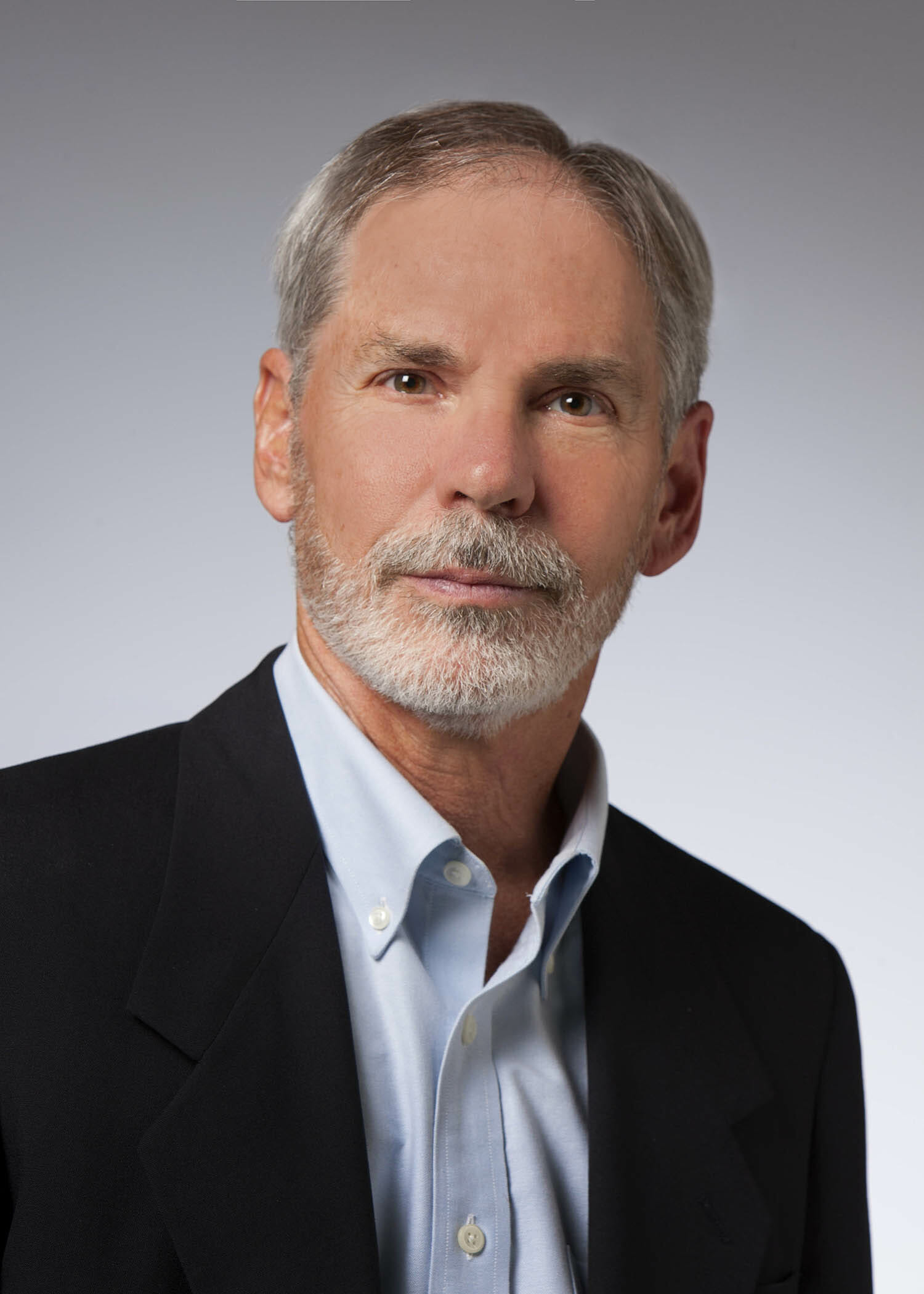 A Damsel for Santa

The Scent of Waikiki
Look Inside
Disclosure of Material Connection: Some of the links in the page above are "affiliate links." This means if you click on the link and purchase the item, I will receive an affiliate commission. I am disclosing this in accordance with the Federal Trade Commission's 16 CFR, Part 255: "Guides Concerning the Use of Endorsements and Testimonials in Advertising."

Penny Warner has published more than sixty books for both adults and children. The latest release in her current mystery series, dubbed the Food Festival Mystery Series, features food trucks and is set at the San Francisco Seafood Festival, where someone is steamed enough to commit murder. “Death of a Crabby Cook” was inspired by the popularity of food trucks and the controversy they engender.

“Their popularity intrigued me,” said Warner. “I thought it would make a great venue for a murder mystery. There’s a lot of controversy about the food trucks vs. brick-and-mortar restaurants, so it’s ripe for trouble.”

Warner, who creates fund-raising murder mystery events for libraries across the country and teaches child development at Diablo Valley College, likes to include a character with a disability in her mysteries. She said, “My first series featured a deaf woman, the second ‘How To Host A Killer Party’ series offered a party planner with ADHD and a mother with Alzheimers, and in my current series, ‘Death of a Crabby Cook’ serves up a computer hacker who has Asperger’s Syndrome. My disabled characters are very empowered and coping well with their disabilities.”


So, how did Warner become so dedicated to helping those with disabilities? She said, “During high school I did volunteer work in a multi-handicapped class. One student in particular had an impact on me. He was diagnosed as being developmentally delayed until they later learned he was only deaf. Once they realized this and put him in a school for the deaf, he made remarkable progress. I became so interested in deafness that I learned sign language and went on to become a sign teacher.”

Warner received her MA in Deaf Education. “I taught infant and preschool deaf children sign language. I stopped teaching briefly when I had my children, and that’s when I began writing. I thought a deaf protagonist would make a fascinating sleuth, since she’d have to use other senses to solve a crime, rather than hearing.”

When she wrote that first mystery featuring a deaf protagonist, Warner was very concerned about acceptance in the deaf community. “It was challenging, since I wasn’t deaf myself, but I got a nice review in a deaf periodical saying, ‘I can’t tell if the author is deaf or hearing, but she’s captured the deaf experience.’ I breathed a sigh of relief and kept writing about the deaf community.”

As for the Food Festival Mysteries, Warner said, “This is a cozy series featuring Darcy Burnett, recently down-sized from her job as a restaurant critic, who goes to work in her Aunt Abby’s food truck. It offers a fun story, a little romance, inside information on the food truck world, and lots of recipes.”

In “Death of a Crabby Cook,” Darcy discovers that someone’s been trafficking in character assassination—literally—when a local chef turns up dead and her aunt is framed for the murder. The victim was an outspoken enemy of the food trucks—and now Darcy wonders if one of the other vendors cooked his goose. With her aunt’s business—and freedom—on the line, it’s up to Darcy and Dream Puff Jake Miller, to put the brakes on a crabby—and out-of-control killer . . . before time is up.

With the San Francisco Seafood Festival behind her, Warner has set her sights on dessert. She said, “I’m working on the next book in the series set at the San Francisco Chocolate Festival, ‘Death Of A Chocolate Cheater,’ and making myself drool over all the chocolate recipes.”

She writes a column for the local newspaper on family life in the Valley. Learn more about her on her website at www.pennywarner.com. 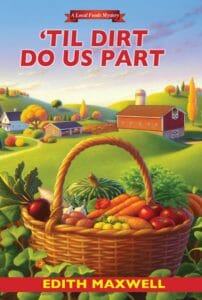 Cam Flaherty’s first season as a farmer is ending and she’s hosting a farm-to-table event to thank her shareholders for their support. The otherwise upbeat event is nearly ruined by Irene Burr, a petite woman with a huge attitude. And the only one who seems capable of tolerating Irene is Preston, Cam’s cat.

The following morning, Cam is cleaning up and preparing garlic for planting when she receives a message from the police. When Cam returns the call, she learns that the call is not friendly, but business. The police ask Cam questions about the party and Irene Burr, but will disclose nothing. Right after the phone call, Sim Koyama visits Cam and tells her that Bobby Burr, Irene’s stepson, is missing, and Irene’s body has been discovered in another neighbor’s pigsty.


Soon, the police settle on Bobby as the killer, but Cam’s not so sure they’ve got the right man. She digs into the murder investigation and soon realizes she could easily become the killer’s next victim.

“’Til Dirt Do Us Part” fits nicely into the cozy-mystery genre. The protagonist, Cam Flaherty, is trying to transition from her former lifestyle as a city-girl, programming geek to an organic farmer in a rural area.

The plot is well thought out. Events escalate to create more tension and the twists will keep readers guessing until the surprise ending.

Maxwell has varied the character dialogue to make each character sound subtly different. However, for a couple of the younger characters, their dialogue sounds forced, as though their slang is being forced into a grammatically correct format.

All-in-all, this delightful cozy will entertain readers even as they learn how to farm organically. Bravo, Ms. Maxwell! 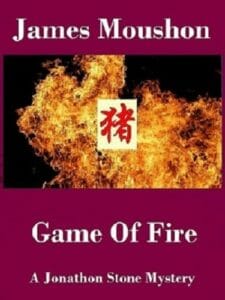 James Moushon and I met at the Tucson Festival of Books in 2013. James recently released his third Jonathon Stone Mystery, “Game of Fire.” In “Game of Fire,” CIA agent Jonathon Stone is brought up against his old nemesis, Tay Minh, when the investigation into an arson fire indicates it might have been an act of terrorism.

When asked why he wrote “Game of Fire,”  James said, “There still remains a huge divide between the North and South Vietnamese immigrates. Each year someone in the Garden Grove area (Little Saigon) of California will fly the North’s flag or display a picture of Ho Chi Minh and violence will occur.”

“The story is based on the Anti-Ho Chi Minh protest during the New Year celebrations of 1999,” said James. “A Vietnamese-American video store owner caused controversy when he displayed in his store a portrait of Vietnamese communist revolutionary leader Ho Chi Minh. Several demonstrations came close to a full scale riot in front of the store.”

Born in Illinois and a graduate of Bradley University in Peoria, James helped lead the startup of the electronic forms industry in its early days. That background of providing an industry with published literature, software products, and training seminars, eventually led James to seek a more creative outlet. He said, “I am currently wearing three hats. I am a mystery writer, a book publishing blogger and a computer consultant.”

Even though the Jonathon Stone mysteries have a CIA operative as the protagonist, they are written in the style of cozy mysteries, i.e., no graphic sex, violence, or language. James pulls on his computer background to make them as accurate as possible. He said, “I do a lot of research. Coming from a computer background, I handle all my writing chores with a database system and some custom programming I threw together. Story lines, character profiles and even common editing problem-areas are neatly controlled. I even use my own software to do the ebook conversion to check out how the ebook format will appear on the various ebook devices.”

James is also concerned that the locations he describes in his books are accurate. “The places I use in my books are places I have firsthand knowledge, backed by a detailed study. I lived in the area the story takes place and the scenes are really snapshots of the good times I had there. I tried to stay away from LA and concentrate on some of the little-known sections like Belmont Shore, Huntington Harbour, Signal Hill and, of course, Little Saigon.”

An explosion and fire rocks a Southern California mall and it is quickly determined to be arson. The timing of the incident is special because it interrupts the Tet New Year’s Festival and Parade in Little Saigon, an area just east of Long Beach.

Enter veteran CIA Agent Jonathon Stone. Already in pursuit of the gunrunning Minh family, he connects with a special FBI task force to assist in the investigation of the explosion and Minh quickly becomes their number one suspect.

Stone teams up with FBI Agent Jodi Shannon to pursue the people behind the arson fire. Jodi is a serious, no nonsense agent who leads the FBI Arson Task Force. While she fights to solve the mystery, she also fights Stone’s advances. As always, he tries to mix business with pleasure.

James Moushon runs three blogs as well as his own website. Those sites are: