You are here: Home / Archives for book review

Margaret Coel delivers with another spell-binding story of Native American history set in modern times with her latest Wind River Mystery, “Killing Custer.” Lander, CO is celebrating the start of the rodeo season with a parade that features a  General George Armstrong Custer impersonator leading the 7th Cavalry. The cavalry is followed by Arapaho warriors lead by a descendant of Crazy Horse. During the parade, the warriors execute a “dare ride”, an old tradition in which warriors circle the enemy to show contempt and superiority. In the confusion, Custer is fatally shot and history is believed to have repeated itself.

Father John O’Malley is on the scene and immediately realizes that the Arapaho warriors were sure to be accused of revenge and the murder of the Custer impersonator. As the story unfolds, Father John supports and defends the Arapaho while trying to find the truth behind the killing.

Attorney Vicky Holden has spent her legal career trying to help her people, but this time Vicky is unable to defend her people because she’s already representing a client who, both professionally and personally, compromises her. Conflicted and feeling guilty for not being able to help, Vicky continues to work for her client while looking for answers that are connected to the murder.

In their search for the truth, Father John and Vicky come together to solve the murder and uncover a conspiracy that could end their lives.

Coel’s characters are well developed, her descriptions, vivid and clear. The plot keeps the story moving quickly and there’s a twist at the end readers may not see coming. As usual, Coel’s dialogue is crisp and authentic and her experience as a historian and expert on Arapaho Indians shows. Five stars to “Killing Custer,” which can be read as standalone or a series. 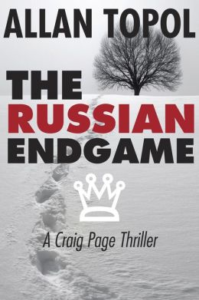 The Russian Endgame is a novel of greed, revenge and international intrigue involving, Moscow, Beijing, Washington and Paris.

Director of EU Counterterrorism, Craig Page, has a history with Chinese General Zhou and is out for revenge for the murder of his only child, Francesca. As Page plots, executes, and fails in his revenge on General Zhou, circumstances in China change. General Zhou becomes China’s new President and meets with Orlov. Together they make plans to unite Russia and China in a common goal. Zhou insists that Orlov prove his sincerity by assassinating U.S. President Dalton.

As suspicions grow regarding President Zhou’s involvement with Orlov, Page, who has become the new CIA Director under new U.S. President Treadwell, works to prove Zhou’s connection. Page joins forces with journalist Elizabeth Crowder to bring down Zhou before he manipulates Orlov into a new operation, stealing potentially devastating military technology capable of destroying the world as he knows it.

The characters in the book are believable with real problems and emotions. Topol’s descriptions were vivid and clear. The plot has fast pacing. Unfortunately, the dialogue didn’t distinguish the characters, with several of them sounding alike. 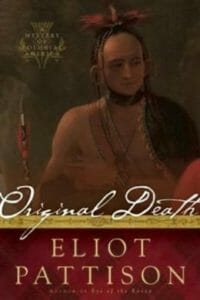 In the third installment of The Bone Rattler series, Duncan McCallum and his companion Conawago go in search of Conawago’s long lost nephew. What they find instead is a scene of terrible death with men, women, and children murdered. No sooner do they absorb the gravity of their discovery than Duncan is arrested for the crime by the British army and Conawago disappears.

Determined to find his friend and learn who was responsible for the massacre, Duncan escapes prison and begins his own investigation even as he’s being tracked by the British army and Scottish rebels. Duncan soon reunites with Conawago and they discover that a vicious killer who calls himself the Revelator is behind the massacre at Bethel Landing. The two also discover that there were children who survived Bethel Landing and that the children are all related to elders of the Iroquois Council.

Step by step, Duncan and Conawago uncover details of the Revelator’s plan, which is to seize power over the Indian tribes by making it appear as if the spirit world itself is in danger. The ultimate climax pits Duncan and Conawago against almost insurmountable odds as they fight for their lives and the survival of the Iroquois tribes.

Pattison uses historical facts expertly in this murder mystery set in 1760 America. Character dialogue well done and the plot intricate in its nature. There are some descriptions of graphic violence, however those are a minor part of the book. Plot pacing is strong with very few slow points and is consistent with traditional mystery-plot organization. One of the few weaknesses in this novel involves the transition between scenes set in different locales. At times, events felt pieced together without consideration for reader orientation. Overall, however, this is a very strong historical murder mystery.