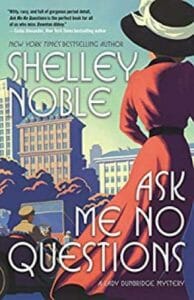 From the publisher of Ask Me No Questions

A modern woman in 1907, Lady Dunbridge is not about to let a little thing like the death of her husband ruin her social life. She’s ready to take the dazzling world of Gilded Age Manhattan by storm.

From the decadence of high society balls to the underbelly of Belmont horse racing, romance, murder, and scandals abound. Someone simply must do something. And Lady Dunbridge is happy to oblige.

I was really looking forward to reading this book. I love the time period, the pomp and circumstance, and and the spirit of the times. In short, I came into this book with high expectations.

The story begins with a smart introduction of Philomena Amesbury, the countess of Dunbridge. Known as Phil to her friends  She has sass, is smart, and has no compunction about showing up the police.

The strength of this book is the plot and the story. It’s filled with twists that left me unsure of who the killer was until the end. For readers who like the continuity of a series, the author introduced multiple long story arcs, which will likely form the basis of future stories.

In period pieces, I look forward to being immersed in the world, but I found the descriptions and character development weak. There were times when they didn’t paint a clear picture, making it difficult to visualize the setting, the dress, the atmosphere, and others where I was quite satisfied. The one main character who really shined was Detective Sergeant John Atkins. His essence and values were clear from the beginning and remained true throughout.

This was a good story overall. I was always interested to see what was coming next and wanted to know how Phil was going to solve the crime. I’m also curious as to what her next adventure will be.


From the publisher of Hall of Mirrors 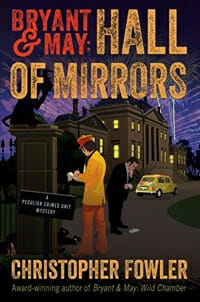 London, 1969. With the Swinging Sixties under way, Detectives Arthur Bryant and John May find themselves caught in the middle of a good, old-fashioned manor house murder mystery.

Hard to believe, but even positively ancient sleuths like Bryant and May of the Peculiar Crimes Unit were young once . . . or at least younger. Flashback to London 1969: mods and dolly birds, sunburst minidresses—but how long would the party last?

After accidentally sinking a barge painted like the Yellow Submarine, Bryant and May are relegated to babysitting one Monty Hatton-Jones, the star prosecution witness in the trial of a disreputable developer whose prefabs are prone to collapse. The job for the demoted detectives? Keep the whistle-blower safe for one weekend.

The task proves unexpectedly challenging when their unruly charge insists on attending a party at the vast estate Tavistock Hall. With falling stone gryphons, secret passageways, rumors of a mythical beast, and an all-too-real dismembered corpse, the bedeviled policemen soon find themselves with “a proper country house murder” on their hands.

Trapped for the weekend, Bryant and May must sort the victims from the suspects, including a hippie heir, a blond nightclub singer, and Monty himself—and nobody is quite who he or she seems to be.

If I were to describe Hall of Mirrors in a single word, it would be “chaotic.” This is the 15th book in the Bryant and May series and, quite honestly, it feels like a bad place to begin. Throughout the story, I found myself disoriented by what I consider inadequate scene setup. Fans of the series may like Fowler’s head-hopping style, switching from one point-of-view to another in the middle of paragraphs, but I prefer to feel more grounded in a scene.

I felt the book was too was about 25% too long. It was as though the publisher said we need 400 pages, and so those pages were filled with regular reminders from the main characters of their ineptitude, details which did not add to the mood or story, and delayed responses to questions asked (some of which were never answered until the denouement.)

Several of the characters introduced seemed irrelevant—until the very end, which is where this book shined. The last ten pages were very entertaining because the author let loose with concise and imaginative descriptions of each character and what happened in their lives after the story. It was obvious from these last pages that Fowler has a sharp sense of humor—I just wish it had come through much earlier in the book. 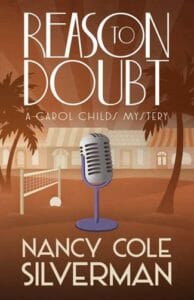 From the publisher of Reason to Doubt

Carol Childs is in the middle of one of the biggest stories of her life. Her daughter Cate has returned from college with a boyfriend in tow. A photographer who police suspect to be The Model Slayer, responsible for the murder of three young women.

Not since the Hillside Strangler has Los Angeles been so on edge.

And when the police arrest Cate’s boyfriend, Carol’s personal life and professional worlds collide. A tattooed cocktail waitress calls the radio station and asks to speak with Carol off the record. She knows the true identity of the real Model Slayer because she says she killed him.

Tensions mount as the clock ticks. The police are convinced they have the right man. Mother and daughter aren’t talking. Carol can’t reveal to investigators all she knows, and unless Carol can find the real killer before the trial begins, an innocent man may spend the rest of his life in prison or be executed for a crime he didn’t commit.

I always look forward to the next installment in this series. One reason is I love learning the inner workings of the radio news industry. Reason to Doubt delivers much more though. It’s also a well-written mystery with crisp dialogue, good plotting, and believable characters.

The mother-daughter dynamics elevate the stakes in a realistic and convincing manner. And the guilt Carol feels when her reporting helps convince the police her daughter’s new boyfriend is a serial killer keeps the character tension on a razor’s edge. Carol is caught in a dilemma many parents face—no good choices and plenty of consequences.

Each new twist develops naturally, yet unpredictably. The outcome of the story remains uncertain until the end. In short, Reason to Doubt is a top-notch mystery and should definitely be on your reading list. 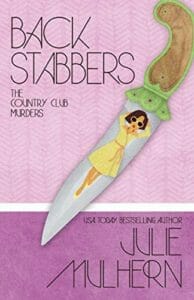 From the publisher of Back Stabbers

All Ellison Russell wanted was an update on her stock portfolio. Instead, she found her broker dead.

With an unexpected out-of-town guest at her house, Ellison is too busy for a murder investigation. Only this time, Detective Anarchy Jones wants her help, and she can’t deny the handsome detective. Can Mr. Coffee supply her with enough caffeine to keep her brain sharp and everyone else happy?

Juggling bodies (one, two, three, four), two-faced friends, her social calendar, and a cat (yes, a cat) is taxing but Mother might be the biggest challenge of all.

With a killer drawing closer, can Ellison put together the pieces or will she be the one getting stabbed in the back?

This cute cozy is filled with humor, twists-and-turns, and a look back to seventies high society. It’s a fun read with crisp dialogue and quirky characters. I especially liked the scene in which there is a literal cat-and-dog fight that results in plenty of mayhem. I don’t want to spoil the surprise of where the cat winds up, but it had me laughing out loud.

The identity if the killer isn’t clear until the end thanks to red herrings and some deft plotting. Relationships between the characters feel real—even when they’re the deliberately contrived relationships of people who mix socially but dislike each other. This creates some delicious backbiting which we, as readers, get to enjoy.

What: This month, Julie is giving away one e-book copy of “Back Stabbers” and I’m adding a $5.00 Starbucks gift card. One random entry will be chosen as the winner. The winner will receive a book and a gift card.

Who can enter: This contest is only open to anyone over 18 years of age. 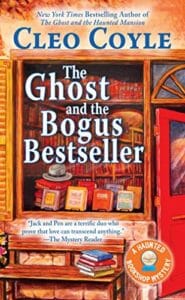 Bookshop owner Penelope Thornton-McClure didn’t believe in ghosts, until she was haunted by the hard-boiled spirit of 1940s private investigator Jack Shepard. Now Jack is back on the job, and Pen is eternally grateful…

After an elegant new customer has a breakdown in her shop, Penelope suspects there is something bogus behind the biggest bestseller of the year. This popular potboiler is so hot that folks in her tiny Rhode Island town are dying to read it–literally. First one customer turns up dead, followed by another mysterious fatality connected to the book, which Pen discovers is more than just fiction. Now, with the help of her gumshoe ghost, Pen must solve the real-life cold case behind the bogus bestseller before the killer closes the book on her.

My review of The Ghost and the Bogus Bestseller

Who would have thought a dead gumshoe could be so much fun? Right from the beginning, the presence of a stereotypical 1930s private detective thrown into a modern world comes through loud and clear. This mystery is all about keeping things light. The dialogue between the protagonists comes through as a relationship between two people with a genuine attraction to each other.

The story moves along briskly, thanks to the banter between the two main characters. There are enough twists and turns to keep the reader guessing about the whodunnit part of the mystery. This isn’t a story filled with deep character development or intense descriptions, but one that relies on an overabundance of cliches straight out of an old movie. The formula works, helping to give readers of The Ghost and the Bogus Bestseller a mystery to solve along with that mysterious fun factor. 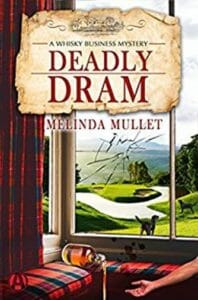 From the publisher of Deadly Dram

Distillery owner Abigail Logan discovers that high spirits are no match for a cold-blooded killer as the Whisky Business Mystery series puts a fatal twist on stiff competition.

For those that don’t know, a “dram” is a small drink of whiskey. And since this is a cozy mystery based on the owner of a whiskey distillery who is attending an industry competition where she expects to receive an award for her company’s product—let’s just say those spirits play a prominent role in this story.

Apparently the whiskey industry is like any other industry. There are rivalries and conflicts and plenty of personality clashes. For instance, there are nationalist distillers who believe that all whiskeys not made in Scotland are inferior. It’s this theme of nationalism that sets up many of the conflicts in Deadly Dram. On the fun side, there’s Abi’s whiskey-drinking dog Liam, who has a knack for causing havoc. All-in-all, those characters are entertaining and fun to follow.
There are multiple murders in this cozy whodunnit. Each seems to further both ascertain and obfuscate who the real killer is. Personally, I would have liked to have seen less rehashing of the clues and suspects and more following the trail to the killer. With that said, the dialogue was crisp and well done, the characters’ actions were always believable and consistent.

There were some good red herrings along the way, and the real killer’s identity remained a mystery until near the end. This is a nicely done cozy that will give you some insight into the whiskey business along with its internal drama and conflicts. It will also keep you entertained until the end.