You are here: Home / Author Interviews / Real life events inspire the story of A Better Goodbye
Spread the love 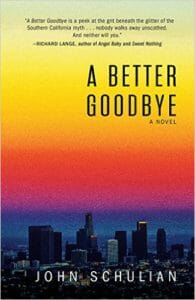 John Schulian admits he’s led a charmed life as a writer. He began his career as a sports writer, moved on to TV, and finally decided to make the transition to novels. Schulian wrote for several popular TV series, including LA Law, Miami Vice, and Midnight Caller. He was the co-creator of the popular Xena: Warrior Princess series, and says it was rewarding to be partly responsible for a cultural phenomenon. Now, Schulian is hoping for another home run with his first novel, A Better Goodbye.

“This may come as a shock to the kind hearts and gentle people who remember me as the co-creator of Xena: Warrior Princess,” said Schulian, “but A Better Goodbye offers a much truer picture of my artistic sensibility. Xena was a job, nothing more. I’m delighted that it turned out so well—thanks primarily to the talent and brainpower of Lucy Lawless,  but if I’d had my druthers, a pilot script I was writing at the same time would have emerged as a hit.”

The pilot script was called “The Ring.” Schulian describes the pilot as “a working-class family drama built around the dreams of a promising young middleweight named Nick Pafko.” In fact Nick is one of the main characters in A Better Goodbye. The story addresses the problem of loneliness, which Schulian sees as being “epidemic” in Los Angeles.

A Better Goodbye — the beginnings

“You can see it in the epic traffic jams that snarl our freeways—a lone driver in almost every car, face contorted by a mixture of anger and frustration, unless they’re mellowing out with a doobie. Sure, they can use their cell phones to call or text a friend, but the friend might be someone they would never think to meet for dinner or even a drink.

When the time comes that she needs saving, the question is, will she let him rescue her?

“That’s the kind of isolation that spawned four major players in A Better Goodbye. Nick Pafko, haunted by killing an opponent when he was a boxer. Scott Crandall has been cast aside by Hollywood and works as a pimp. Onus DuPree Jr. is a prison-hardened sociopath who will use Scott for his own purposes the first chance he gets. And, Jenny Yee—beautiful, smart, funny—must guard against letting people get too close to her lest they discover that she’s paying for college by working in the sex trade.”

Of those characters, Schulian said, “All four are so used to loneliness that they scarcely notice it. If DuPree and Scott ever did, they still wouldn’t give a damn. Nick and Jenny, on the other hand, cling to a shred of their humanity even though they qualify as lost souls.  Nick isn’t looking to be found, and he hates the attention he brings on himself through an early act of bravery. But he harbors hope for Jenny and treats her accordingly. When the time comes that she needs saving, the question is, will she let him rescue her?”

The idea for the story began with true events involving prizefighter Gabriel Ruelas and the death of one of his opponents. Schulian said, “Gabriel walked out of the ring a winner that night, but all he could think about afterward was the life he had taken. And that’s how it is with Nick Pafko. The killer instinct he needed to be a successful fighter, maybe even a champion, died when his victim did.”

So there I sat with two seemingly incompatible ideas—the sex trade and death in the ring—and I didn’t know how to bring them together..

A second influence on A Better Goodbye came from the classified ads section of L.A. Weekly. “For years there were page after page of ads for what is euphemistically known as ‘sensual massage.’ Some had massage licenses and offered real massages. Others threw in—here’s another euphemism—a happy ending. And then there were the fair flowers who were keeping alive the world’s oldest profession.

“So there I sat with two seemingly incompatible ideas—the sex trade and death in the ring—and I didn’t know how to bring them together until I remembered a story I’d heard when I was a sports columnist for the Chicago Sun-Times. There was a young woman who was paying for her college education by working as a hooker, and she got busted making an outcall to a hotel.

“Bottom line: She told the police everything she knew. Her pimp was most unhappy, and there was talk that he would take his unhappiness out on the young woman. Fortunately, a client she had grown close to knew a boxer, a seriously tough kid with a big smile and a bigger heart, named Johnny Lira. Johnny said he’d look after her. After that, her problems disappeared. As soon as I remembered that story, I knew there was a way to bring my fighter and my soiled angel together in a way that could be traced to real life.”

Learn more about John Schulian on his website at johnschulian.com.